The river Kolpa stretches for 292km, of which 113km run along the country border with the Republic of Croatia. The river is also considered the longest Slovenian “coastline” and one of the warmest and intact rivers in Slovenia.

The river is divided by more than 50 dams, which are typically made of stones and are remainders of mills, sawmills, and blacksmith’s, which no longer exist. However, some dams still serve their purpose.

Kolpa is rich with flaura and fauna. Many rare, endangered bird species have found their place of living at its vicinity, particularly birds connected to water. The village Miliči hosts around twenty pairs of grey herons. There is also an otter, which is one of the most endangered European mammals. Latest researches have discovered as many as 39 autochthon fish species in the river. This indicates that nature is still intact in this area. The river is attractive all year round. But it is particularly popular in summer months, when it is perfect for swimming, as the water temperature rises even up to 30°C.

If you decide to pay Kolpa a visit, you surely won’t regret it. You can choose among a wide rage of sports and recreational activities, which are possible all along the river’s stream, such as boating, canoeing, kayaking or rafting. The river is not very demanding and it is suitable even for first-time rowers. Even fishing enthusiasts will be able to make the best out of the river.

Along the river and in its vicinity you can find organized and earmarked hiking routes. One of such routes, called the Trška path, begins in Stari trg ob Kolpi and ends in Sodevci. The southernmost Slovenian path winds from Radenci to Damelj, and is followed by the Mlinarska path from Damelj to Vinica. Further on, along the river you can find the Fair path, which ends in Žuniči. In Žuniči you can also find a 200m long the beekeeper’s educational path. The exploration of the area along Kolpa continues on the educational path Kučar-Kolpa in Podzemelj, and comes to an end on the educational path Zdenc-Vidovec in Božakovo. Cycling paths along the river also enable recreational pastime.

If you want to dwell on the river banks a while longer, there are also tourist farms, camps, inns, or other accommodation facilities along the river and its surroundings. You will undoubtedly be offered homemade dishes, good wine, and openheartedness. 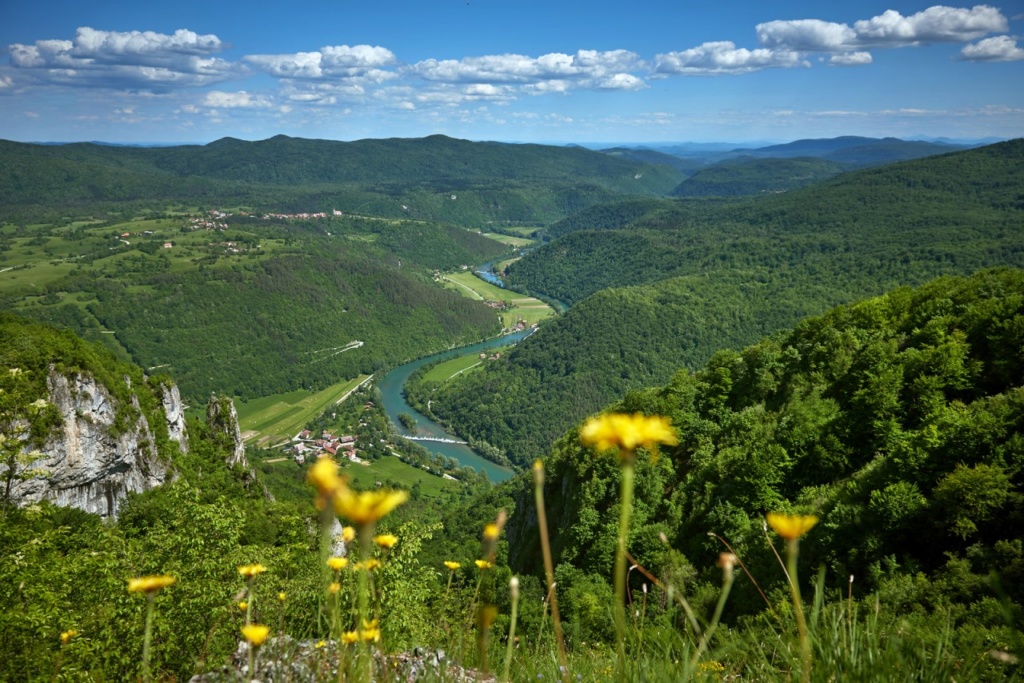 Fern-lands are agricultural areas overgrown by birch trees, here and there by red pine, and by undergrowth of eagle fern and wolf’s-foot clubmoss. Due to a specific plant community, they complement biological and landscape diversity of Bela krajina that has been disappearing due to abandoning the use of litter for bedding, and a different way of farming.

In the centre of Metlika, we turn towards Drašiči, and shortly after leaving the last houses of the urban settlement behind us, we are already in the middle of larger and better maintained fern-land, as the inhabitants of Slamna vas, Boldraž, Vinomer and Drašiči villages still use dry fern to spread litter for cattle.

A real holiday associated with a birch tree is Jurjevo (St. George’s Day). Following an ancient custom, people of Bela krajina fasten young birch branches on a young man and take him as Zeleni Jurij (Green George) among people in order to welcome the arrival of spring.

The Angling Society Metlika has its own fishing home located at the ponds in Prilozje, which were completely renovated and tidied in 2011. The home now hosts gatherings of fishermen and other nature lovers, fishing competitions, social events, while many people just pass their time at the ponds full of water lilies, relaxing from a busy pace of life.

The waters of the Angling Society Metlika are open to both domestic and foreign visitors, and due to their appropriate location in terms of fishing, they offer a wide variety of fish. Fishermen can fish mainly for pike, catfish, carp, chub, tench, common nase and pigo. There is also trout and Danube salmon found, as the waters are becoming cleaner year after year. This was a result of an increasing number of wastewater treatment plants, which shows a beautiful picture of this part of Bela krajina.

The highest lying village of the Metlika region, situated 526m above sea level, offers a spectacular panoramic view of Bela krajina. The local mountain association from Metlika built a 17m high belvedere, which will only fascinate you even further.

The marked mountain footpath takes you to Krašnji vrh from Metlika. The footpath stretches across fields, forests, and vineyards, passes villages Slamna vas and Bojanja vas, where it reaches Krašnji vrh, and continues onwards to the village Radovica, and then back to Metlika